Rapper and activist, Fofo Adom'Megaa aka Rost wants to make sure that people on housing estates are not ignored in the election. PHOTO: ELORA THENEVET 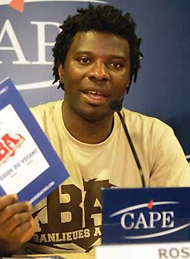 Rost with the 2007 voting guide he published to inform immigrants of their rights.
EXCLUSIVE: Afro-French Activist Calls For Change

Togo-born rapper and activist, Fofo Adom'Megaa aka Rost is a longtime activist for people who live in housing estates, (les banlieues) many of whom are, like him, of immigrant origin. Having worked closely with the new French president François Hollande before he was elected, Rost talks about Hollande and the philosophy of the Socialist party when it comes to people of colour.

How did you start your activism?

I started years ago when I began rapping. I wrote political and social lyrics. My first album was called "Vénère Comme Lucifer" (Angry As Lucifer) and there were songs talking about issues on the housing estates (les banlieues). I always talked about what I saw around me. I produced 30 records and in 2004, I decided to go solo and released my first album, "La voix du people" (People's Voice). There was a song on it called "Rêve Solution" (Solution Dream) about creating a revolution and solution at the same time. That's when I began to explain to politicians that there was increasing tension on housing estates and in [poor] neighbourhoods. I said then that we needed to change or one day they would explode. When the album was released November 2004, we were censored by radio. But we had taken the temperature of the streets. You see what happened in 2005. The housing estates exploded with the revolts - I disagree with some who called them riots. It was a bad period. We [musicians] are lucky because we have a microphone and we can say a lot. The mic is a weapon and we can use it for change. But we think we're limited. Realising that we can't confine ourselves to music, I decided to do more, to explain our reality in the French media. I wanted to explain why teenagers broke up and burned everything. The government didn't understand and listen to their pain - incidentally, I don't think the youth used the best methods because they burned cars in their neighborhoods. I decided to do a tour to get people to vote because it's an important weapon and the best way to demonstrate your citizenship. As a result, I was invited on different TV shows.

French media describes you as a socialist militant. Do you agree with that and do you support the Socialist Party?

Well, I can confirm that I'm on left. I love their ideology. It's not about people serving the economy but the economy serving people. It's very different from the liberal ideology. I love the left party when it puts people at the center of debates and highlights solidarity, human values and respect. I'm deeply rooted in these values. I'm from the progressive left which means that we have to adapt to our environment. France is not a colonial empire any with submissive citizens like our parents were. This is a new generation who speaks and protests in a different way.

François Hollande is the new French president. How did you meet him and become close?

I met him in 2008. I had published a book titled "Enfants Des Lieux Bannis" (Children of Banned Places), a sociological and political autobiography. Hollande's staff read it and they called me. Stephane Le Foll from the Socialist Party called me because I did not agree with the party on some issues. I wrote that the Socialist Party had used us to reach their goal. I was very strident about the issue of diversity and representation in the party. It seemed easy for them to put black and Arab French people on posters, but when it came time to lead the party there was just one color. We couldn't accept this anymore. I asked them to debate diversity in the party if they didn't agree with what I said. I organized the debate and François Hollande came and he was very receptive. It was very interesting and open. He is a smart man and he likes to respond to critics. He said he was disappointed and that I was right about what I had said in the book. He said ‘we need people like you because sometimes we have made mistakes.' I liked the fact that he was open minded. After that we met several times including in 2010 on Europe 1 Radio and we stayed in touch.

Have there been more signs of diversity in the party since 2008?

Recently yes. I have friends in the Socialist Party. There hasn't been a big revolution but signs of evolution. The issue of diversity in the party is a real issue. It's because you have people behind the scenes who are fighting for equality. Have you been asked to join the party? Yes, I was asked to join different political parties - from the left, right and center. I refused to because I did not want to get involved in that kind of dynamic. I'm here for urban neighbourhoods. I'm stronger when I talk about them and I have more freedom than if I was in a party. Some people thought I was in the Socialist Party because they asked to use one of my songs "L'Avenir C'est Nous" (We Are The Future) for François Hollande's campaign. I gave them the okay to use it. To me it was more friendship than politics.

It seems that the candidates did not readily address issues on the housing estates (les banlieues). How do you feel about that?

It's a process of evolution. Change demands that someone opens his/her mind to the current situation. Sarkozy opened his government to diverse people which the Socialists promised to do and didn't. I was disappointed about that so I did an interview with the weekly newspaper Le Point (www.lepoint.fr) where I explained that I didn't understand why they didn't address issues in "les banlieues." Hollande asked me to join his team and be in charge of this area. But I didn't want to do this by myself. I wanted some substantial decisions made and concrete things achieved. I wanted two people from the party and two others from outside of the party to work on the issue with me. I needed the balance of different opinions. If it was just about my personal goals, I would have joined the party and that's it. We had a lot of meetings with François Hollande and sometimes with my small staff and Pierre Moscovici (Hollande's campaign manager and former minister in charge of European affairs in 1997). In the end we spent a lot of time for nothing. There were conflicts of opinions between Hollande's staff and I was angry. I thought, ‘you don't want to talk about the housing estates. Okay now I understand that people like Socialist Party's spokesman Benoit Hamon didn't want to talk about housing estates in the campaign. He didn't think it was important; that they didn't need to talk about them because they're not a universal issue; it's something that should be part of a special effort.' But we have to understand the issue and not make the same mistakes we did in the past.