Hadia Tajik, a Norwegian-Pakistani Labour party politican, has been an adviser to Prime Minister Jens Stoltenberg and was the youngest member of his team. She was elected to parliament in September 2009. 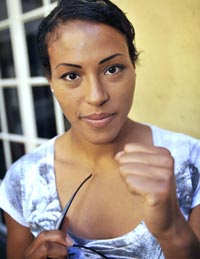 Unknown to many outsiders, Norway has a thriving multicultural community. Unfortunately there are no figures establishing how many people of color live in the country. However there are 423, 000 immigrants living in Norway and 86, 000 Norwegians with immigrant parents. Together these two groups make up 10.6 percent of Norway's population of 4 million.

The personalities colorfully profiled here span from entertainment to sports to politics. Many of them are born in Norway, each in their own way demonstrate the richness of Norway's multicultural community.

In 2007 Braekhus, who is sponsored by Adidas, debuted as a professional boxer and beat Croatian Ksenija Koprek. On March 14, 2009 she became the Women's World Welterweight Champion in the World Boxers Association. She is currently based in Berlin.

John Carew has been popular in his native country since he captivated the attention of the sporting public at just 17. He was spotted, then, playing for his home town club Lorenskog, just outside Oslo.

Born Sept. 5 1979 to a Gambian father and a Norwegian mother, Carew plays for Aston Villa, and is the captain of the Norwegian national team. Carew has played 80 times for the Norwegian national team - in November 1998, having just turned 19 two months earlier, Carew became the first black player to represent Norway. He has also been a success on the field for Aston Villa, signing a deal that kept him at the club until 2011. He retired in 2013.

In 2000 after joining Spanish team Valencia, Carew reportedly asked to have his jersey emblazoned with his middle name Alieu which translates as "strength" in his father's Gambian homeland. His request was turned down.

Mira Craig took the Norwegian music industry by storm in 2005 with her singles "Boogeyman" and "Headhunted." The half Norwegian, half African-American musician is often called Norway's answer to Beyoncé by Norwegian tabloids.

Craig's distinctive low, deep voice distinguishes her from the smoother R&B vocals common in the genre. Although her debut album ‘'Mira Mira'' won an Amanda, Norway's highest musical accolade, Craig is mostly known for penning Norway's Eurovision 2008 melody ‘'Hold on be Strong.'' The song went on to win 5th place at the competition.

Born in Oslo 31 July 1982, Craig is currently hosting the first season of X Factor in Norway, a competition designed to find unsigned music talent. She has also launched her own sunglass and jewelry line.

Hadia Tajik is a Norwegian-Pakistani Labour party politician. Tajik's parents moved from Pakistan to Rogaland in Norway where she was born July 18 1983. Tajik has a Masters in Human Rights from Kingston University, UK and a BA in Journalism from the University of Stavanger.

In 2001 she edited the anthology, "Svart på Hvitt" (Black on White), by young immigrants on what it's like being a minority in Norway. Tajik's political career took off when she began as a political adviser in the Labour and Equality department in 2006. Since then she has also been Prime Minister Jens Stoltenberg's political adviser and the youngest member of his team.

Her career seemed threatened in the summer of 2009 when Tajik became embroiled in a heated public debate about the right of Muslim women to wear the hijab in the Norwegian police force. But in September 2009 she was voted into parliament and will be a member of the church, education and science committee there.