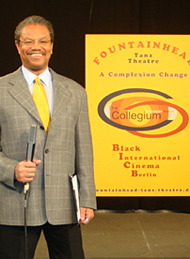 Professor Donald Griffith on the set of The Collegium. The program airs in cities across Germany.

Fountainhead Tanz Theatre:  On a mission of cultural unity

For the past 30 years Professor Donald Muldrow Griffith has used the arts to pursue a very personal mission - to create harmony between people of different cultures in his adopted home of Berlin, West Germany.

Griffith, who is African-American, and three fellow artists, his now wife, Gayle McKinney Griffith, Ricky Powell and Lynnda Curry founded the Fountainhead Tanz Theatre in 1980 with that goal in mind. Three decades later the Griffiths continue to run a set of highly-regarded, multi-disciplinary programs in theatre, film, music and dance under its umbrella, bringing together not only local artists, but those from all over Europe and the world.

The annual Black International Berlin Film Festival, for example, attracts filmmakers like award-winning Frances-Anne Solomon, a UK-born Trinidadian, whose works include the 2007 A Winter's Tale, an examination of life in Toronto's Caribbean community. With a focus on the African Diaspora and Africa, as well other intercultural perspectives, some 60 films from countries like Cape Verde, Iran, Spain, Germany, the United Kingdom, and Madagascar were screened at the 2010 event.

Meanwhile, a weekly TV show, The Collegium keeps its finger on the artistic pulse, especially when it comes to introducing "unseen faces" to audiences. "The goal of the telecast is to provide a forum for persons of various national, cultural, ethnic, religious and socio-economic backgrounds to present their perspectives to a diverse and interested audience," the organization said. The program is broadcast every Sunday from 7-8 p.m. and Wednesday from 11-12 p.m. on the ALEX - Open Channel Berlin (ALEX - Offener Kanal Berlin), with additional showings in other German cities.

With a strong roster of programs and future initiatives - like the Fountainhead in Consultation, which will formally bring together artists, educators, business people and others - the future looks bright for the theatre.

And, there is no doubt that Fountainhead Tanz today reflects the culmination of the group's vision all those years ago. Griffith recalls the moment when everything crystallized shortly after the four accepted an invitation from Theater des Westens to Berlin in the late 1970s. Inspired by their new surroundings, all of them decided to stay.

"I read an article in the International Herald Tribune about a museum being completed in Paris, France where the director stated they wanted the Centre Georges Pompidou to become a `fountainhead of art,' a source of creativity that was and remains one of the basic tenets of the philosophy Fountainhead Tanz Theatre seeks to pursue. Our colleagues agreed upon the name and direction. We were home in Europe and Berlin, Germany," Griffith explained.

With longevity that any enterprise would envy - the film festival just marked its 24th year, and the Collegium its 15th - Griffith is proud of their accomplishments but not surprised. He believes it all comes down to the power of the arts.

"Art is a source of creativity, inspiration, information and a means of communicating across and through possible obstacles of language, nationality, customs, culture and misunderstandings based upon skin color, gender and sexual persuasion," Griffith said.